Suzanne Shank among the 'most powerful' on Wall Street 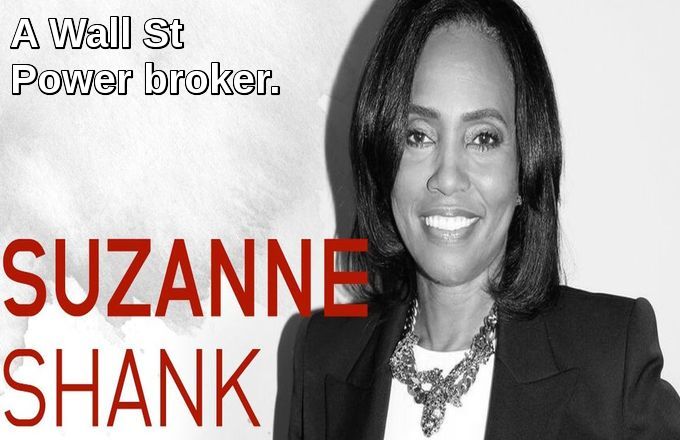 Growing up in Savannah, Suzanne Shank was your typical overachiever — a cheerleader and homecoming queen, editor of the school newspaper and valedictorian of the Sol C. Johnson High School Class of 1979.

But the path she has taken since has been anything but typical.

Earlier this month Shank became the majority owner, chairwoman and CEO of Siebert Brandford Shank & Co. LLC, a firm she helped create, in a move that has made her one of the most powerful women on Wall Street.

The firm was founded in 1996 by the late Muriel Siebert — a Wall Street icon and the first woman to own a seat on the New York Stock Exchange — together with Shank and recently retired chairman Napoleon Brandford III.

The company’s product and service offerings include municipal bond underwriting, corporate debt and equity underwriting, investment banking and execution services for many of the largest Fortune 500 companies.

In less than two decades, Siebert Brandford Shank & Co. has underwritten more than $2 trillion in infrastructure financing across the country as well as bond and equity transactions for major corporate clients.

Shank credits the late Elpie Parris, her guidance counselor at Sol C. Johnson High, with steering her to a STEM education long before the acronym for Science, Technology, Engineering and Math was coined.

“She told me, ‘You’re good in math and science. You should consider engineering.’

“I only had a vague idea of what that was, but I did a little research and learned that the average engineering student received between six and eight job offers at graduation,” Shank said.

“That sounded good to me.”

She applied to Georgia Tech and Vanderbilt, was accepted by both and ultimately chose to stay in state at Tech, working holidays and summers at Levy’s Department Store on Broughton Street.

She earned a degree in civil engineering and, as predicted, found herself with multiple job offers.

“At the time, General Dynamics was opening a new facility in Atlanta for its Electric Boat division, which builds submarines,” Shank said. “I liked the idea of staying in Atlanta, so I went to work for them.”

After about two years with General Dynamics, it became clear to Shank that she was drawn more to financial management than engineering.

“So I decided to go back to school to get a graduate degree in finance. My parents were not thrilled,” she said, laughing. “They said, ‘You’re just getting started with your career.’ But I knew in my gut it was what I should do.”

She applied and was accepted to Harvard, Columbia and the Wharton School of Business at the University of Pennsylvania. She chose Wharton “because it was more analytical, and that was what I was most comfortable with.”

Because she was a civil engineer just breaking into another discipline, she was at a decided disadvantage when it came to snagging that all-important summer internship midway through graduate school.

“I was a relative unknown and not invited to the Wall Street interviews,” she said.

Undeterred, Shank decided to take matters into her own hands.

She took the train into New York City and — armed with little more than a subway map, her resume and a healthy dose of bravado — began to knock on doors in the city’s financial district.

Her determination paid off.

“I think I got the last summer internship on Wall Street,” she said.

It was with a financial advisory firm — small but with an excellent reputation. There, Shank got her first taste of the world of municipal bonds and discovered that structuring bond deals was her forte.

After she earned her MBA, she was offered a permanent job at her internship firm — and almost immediately discovered that permanent was a relative term. Black Monday occurred only two months later, and financial firms began to lay people off.

“I quickly learned that this business is cyclical,” she said. “And out of crisis comes opportunity.”

For the next decade, Shank worked for several financial firms, including Grigsby Brandford & Co., where she met and became friends with founding partner Napoleon Brandford.

In 1996, she and Brandford were approached by Siebert about forming a firm, and a partnership was struck.

By 2006, Siebert, Brandford Shank & Co. had become one of the country’s largest African-American-owned investment banks, with some $360 billion in transactions to its credit.

With Siebert’s death in 2013 and Brandford’s retirement earlier this month, the firm realigned its ownership structure under Shank’s leadership to create the pre-eminent black, Hispanic and woman-owned firm on Wall Street.

Through it all, Shank remains close to her family and her hometown of Savannah, calling her parents, Mary and Roger Gordon Shank, her best advisers.

She is grateful, too, for the values her parents instilled in her.

“Everyone’s heard about how cut-throat the world of Wall Street can be,” she said. “Movies like ‘Wolf of Wall Street’ portray it as a place where people can lose all sense of ethics.

“Fortunately, my family — my parents as well as my husband and two daughters — keeps me very grounded.”

Although she “basically lives on airplanes these days,” shuttling back and forth from her Detroit home to the company’s dual headquarters in New York and Oakland, Calif., as well as 15 other offices around the country, Shank has never lost her love for her hometown.

“I get back there several times a year, but it’s never really enough,” she said.

And, like most native Savannahians who have moved away, she has those “must do” favorites.

“While I love trying out the new restaurants — I’ve heard lots of buzz about The Grey — I never get tired of the Pink House,” she said. “And a visit to Savannah is just not complete without a trip to Carey Hilliard’s.”

The mention of Carey Hilliard’s is enough to make Mary Shank smile.

“Suzanne does love that restaurant and has since she was a child,” her mother said. “There have been times when we’ve picked her up at the airport and gone straight to Carey Hilliard’s in Pooler.”

Understandably proud of her only child, Mary Shank is reluctant to take any credit for her daughter’s success, although it’s clear she and her husband led by example.

“I grew up on the heels of the Depression,” she said. “But I always knew I was going to college. Education was the ticket to success.”

After teaching in Savannah public schools for 14 years, she went into school administration, where she remained until she retired.

Roger Gordon Shank, the first black bus driver hired at Chatham Area Transit, was in administration at CAT when he retired.

“We did stress education to Suzanne,” Mary Shank said. “But we didn’t have to push her too hard. She loved books and was reading long before she started school. She was quiet, even-tempered and smart. She never got into trouble — although she did about scare me to death when she told us she was quitting her job to go to graduate school.

“We’ve always tried to be thrifty, and I just couldn’t comprehend how she could give up a job making more than $20,000 a year. But she had saved some of her salary and she knew exactly what she was doing.”

While Shank gets home to Savannah less frequently than she wishes, her parents spend a good deal of time in Detroit with their daughter, son-in-law and two granddaughters.

Mary Shank says she still marvels at how her daughter does it all.

“She’s obviously a good businesswoman,” she said. “But she’s also a good daughter, wife and mother and very active in her church.”

While her firm handles huge transactions — the largest to date is $1.5 billion — Shank is perhaps proudest of her first Savannah deal.

“We handled a $15 million refinancing for the Savannah airport in 2013,” she said. “I got to go before the airport commission and Savannah City Council, I saw lots of old friends and friends of my parents. It was just a wonderful experience.”

As the CEO of the top black, Hispanic and woman-owned firm on Wall Street, what advice does Shank have for young women and minorities looking to break into high stakes finance?

“First, you need to know that this job requires a tremendous amount of hard work and sacrifice,” she said. “You have to be prepared to deal with long hours and office politics.

“And you need a mentor.”

Shank was fortunate, she said, to have Muriel Siebert as a mentor and has tried to pay if forward by mentoring young people as her career progressed. She founded the Detroit Summer Finance Institute, which provides internships to young finance students.

“But don’t think you can just go out and pick a mentor,” Shank cautioned. “It doesn’t work that way.”

Instead, she said, you have to conduct yourself in such a manner that someone will want to mentor you.

“That means setting yourself apart by your contributions and your passion for your work. Then the right mentor will pick you.

“And the right mentor can make all the difference.”