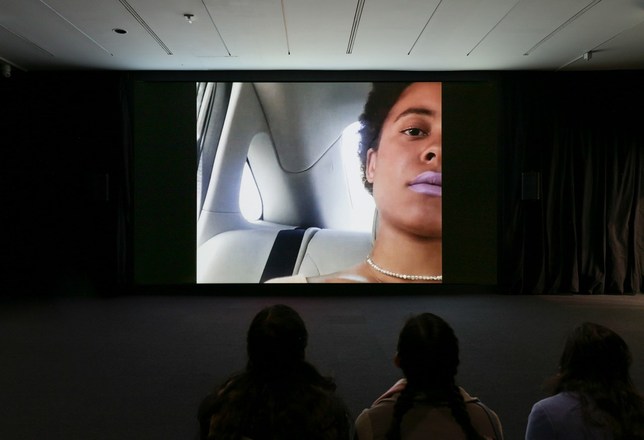 A new report requested by French President Emmanuel Macron outlines proposals for repatriating African cultural objects. The report by scholars Bénédicte Savoy of France and Felwine Sarr of Senegal, recommends “that objects that were removed and sent to mainland France without the consent of their countries of origin be permanently returned—if the country of origin asks for them.”

Grenada has selected four artists to represent the nation in its third appearance at the Venice Biennale next year. Based on the theme, “Epic Memory,” Grenada plans an exhibition inspired by Derek Walcott’s 1992 acceptance speech for the Nobel prize in literature. The Caribbean nation is not providing funds to foot the bill for its pavilion, however. In response, one of the artists, Billy Gerard Frank, is crowd-sourcing his budget.

Time magazine’s Nov. 15 cover asks “Who Gets to be American?” and features a recreation of Norman Rockwell’s Freedom to Worship image from his 1943 “Four Freedoms” series. The cover image by Hank Willis Thomas and Emily Shur is part of Thomas’s For Freedoms project and accompanies several articles about immigration and U.S. border policy, including “I Love America. That’s Why I Have to Tell the Truth About It,” a cover essay by Pulitzer Prize-winning author Viet Thanh Nyugenk, who writes about his experiences as a refugee. READ MORE about the cover image.

According to artnet News, Bill Cosby, who was sentenced to three to 10 years in state prison for aggravated indecent assault in September, is levering two multimillion dollar Thomas Hart Benton paintings to raise capital. The Cosbys assembled an impressive collection over the decades primarily focused on African American artists that is documented in the book “The Other Side of Color: African American Art in the Collection of Camille O. and William H. Cosby, Jr.,” and was showcased at the Smithsonian’s National Museum of African Art from 2014-2016 in the exhibition “Conversations,” which opened just as dozens of sexual misconduct accusations against Cosby were coming to light.

In 1982, the Metropolitan Museum of Art opened a wing devoted to art from Africa, Oceania, and the Americas. After nearly 40 years, the New York City museum announced it plans to renovate the galleries, spending $70 million. Designed by Kulapat Yantrasast of wHY Architecture, the project is expected to begin in 2020 and be completed in 2023.

Accused of censorship, the D.C. Commission on the Arts and Humanities backtracked on recently added grant language requiring recipients to refrain from producing work that could be considered lewd, offensive, or political or risk forfeiting their grant funds.

From left, Sharon Holm is joining the Pérez Art Museum Miami | Photo courtesy PAMM; Marc Bamuthi Joseph has been hired by the Kennedy Center for the Performing Arts | Photo by Bethanie Hines

Marc Bamuthi Joseph has been named vice president and artistic director of social impact at the John F. Kennedy Center for the Performing Arts in Washington, D.C. He is charged with expanding the Kennedy Center’s audience and increasing its footprint in the community. Described as “a seasoned administrator and a highly acclaimed practicing artist,” Joseph is a dancer by training who has created a wide-range of performance pieces, from spoken word and Hip Hop to theater, opera, and multimedia. He previously served as chief of program and pedagogy at the Yerba Buena Center for the Arts in San Francisco.

Sharon Holm joined the Pérez Art Museum Miami as deputy director of marketing and public engagement. Most recently, she served as vice president of marketing and communications at the Bechtler Museum of Modern Art in Charlotte, N.C.

Spelman College in Atlanta announced the appointment of Will Power as a distinguished professor in the Department of Theatre & Performance. An award-winning playwright, performer and co-creator of hip hop theater, Power is considered “an innovator and dramatic explorer of new theatrical forms.” The Andrew W. Mellon Foundation Playwright in Residence with the Dallas Theater Center, he comes to Spelman from Southern Methodist University.

Kristine E. Guillaume, 20, was elected president of The Harvard Crimson, becoming the first black woman (and third black person ever) to lead the Harvard University newspaper in its 146-year history. A member of the Class of 2020, Guillaume is a joint major in African American studies and history and literature.

Kapwani Kiwanga won the National Gallery of Canada’s 2018 Sobey Art Award which includes a $100,000 prize. She is the first black artist to receive the award since it was established in 2002 recognizing the latest developments in Canadian contemporary art. Working across a range of mediums from sound and performance to sculpture and video, Kiwanga marries “her training in anthropology, comparative religion and documentary film with her interests in history, memory and storytelling.” Earlier this year, she won the inaugural Frieze Artist Award in New York. Born in Hamilton, Ontario, Kiwanga lives and works in Paris.

Kapwani Kiwanga is the first black artist to receive the Sobey Art Award since it was established in 2002 recognizing the latest developments in Canadian contemporary art.

The winners of Artadia’s 2018 Atlanta awards are artists Krista Clark and William Downs. Each will receive $10,000 in unrestricted funds.

The Souls Grown Deep Foundation has arranged gift/purchases with 12 museums including the Morgan Library & Museum in New York, which recently acquired by Purvis Young’s “Sometimes I Get Emotion From the Game,” early 1980s (ballpoint pen and marker, on paper glued to found book).

Two Smithsonian museums have jointly acquired Arthur Jafa‘s “Love is the Message, The Message is Death,” a seminal work that reflects the African American experience and the state of race and politics. The American Art Museum and Hirshhorn Museum and Sculpture Garden acquired the 7.5-minute, single-channel video, which is composed of a montage of images set to the music of Kanye West (“Ultralight Beam”). “Love is the Message…” was recently on view for nearly at year at the Hirshhorn, featured in the exhibition “The Message: New Media Works” (Nov. 18, 2017-Sept. 23, 2018).

The Souls Grown Deep Foundation in Atlanta has amassed a collection of more than 1,300 objects by Southern African American artists including Thornton Dial, Nellie Mae Roe, Lonnie Holley, Purvis Young, and the quilters of Gee’s Bend. The foundation has been collaborating with museums around the country recently to add works to their collections through gift/purchase arrangements. A new series of acquisitions was just announced with works going to five new museums—the Brooklyn Museum, the Morgan Library & Museum, Spelman College Museum of Fine Art, the Dallas Museum of Art and the Museum of Fine Arts, Boston

Professors Kellie Jones (Columbia University) and Steven Nelson (UCLA) are collaborating as co-editors on a new series of publications at Duke University Press. Visual Arts of Africa and its Diasporas will focus on “pathbreaking approaches to studying the multifaceted and multilocated arts and architecture produced by peoples of African descent around the world.” The first book in the series, “Bloodflowers: Rotimi Fani-Kayode, Photography, and the 1980s” by W. Ian Bourland, is scheduled for publication in February/March 2019.

John Akomfrah has been selected as the 2018 artist for ICA Boston’s Watershed. The Ghanaian-born filmmaker lives and works in London. Akomfrah is presenting “Purple,” a video installation about the implications of climate change, for the first time in the United States ( May 26-Sept. 2, 2019).

A new postage stamp paying tribute to “sexy sexy soul singer” Marvin Gaye (1939-1984) is forthcoming in 2019 from the U.S. Postal Service. Part of the Music Icons series, Gaye’s image is illustrated by Kadir Nelson. The 42nd stamp in the Black Heritage series will also be introduced next year featuring actor and tap dancer Gregory Hines (1946–2003).

Artist and designer Malene Barnett recently founded the Black Artists + Designers Guild (BADG), with a mission to increase representation of creatives in the design world and help editors, manufacturers, and clients find talent. “Now there are no excuses,” said Barnett, who has garnered support from interior designer Sheila Bridges, among many others. FIND MORE about BADG

The next edition of the Black Portraiture[s] conference in October 2019 is titled “Memory and the Archive, 1619-2019. Past/Present/Future.” Organizers of Black Portraiture[s] V at New York University are seeking summary abstracts for papers or panels “related to the subject of the trans-Atlantic slavery and its profound contemporary resonances in artistic methods and archives that span visual and performing arts, architecture and structures of public memory.” The submission deadline is Dec. 15, 2018.

In South Carolina, the North Charleston Cultural Arts Department is inviting fiber artists throughout the United States to participate in its 13th Annual African American Fiber Art Exhibition. For consideration, the deadline for submissions (which require a $30 fee) is March 1, 2019. CT